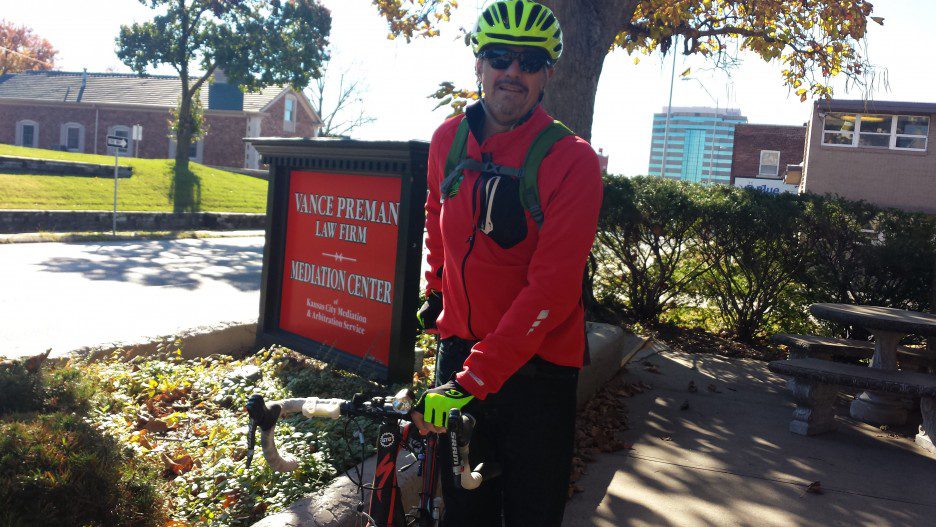 My office building in Midtown Kansas City is 26.7 miles from my home in rural/suburban Johnson County. A long commute here, not for some of you in other parts of the country. I’ve been thinking about attempting a bike commute, today I had my chance.

My trusty Sprinter Van, the Lshack, was due to be winterized, a sure sign that summer was over. Instead of calling Uber, I brought along my bike. Sunny and 50 degrees, let’s do it! My RV shop is in a commercial/industrial area that has seen better times. They have had an ambitious road improvement plan in place; sadly, the plan doesn’t  include bike lanes. Local merchants including a BBQ joint, fought against the lanes. That joint is now a gun shop, some type of Karma had to be involved.

I dropped off the Sprinter, donned my fluorescent green helmet and saddled up. I left the spandex at home and wore some stretchy jeans with narrow legs that surprisingly, worked pretty well. Heading Eastbound on Merriam lane took me into a short section of Kansas City, Kansas (no, the Royals don’t play in Kansas, they are in Missouri). My route took me through a recently completed, like completed yesterday construction project, across heavily used railroad tracks which ran at a severe angle to the road. I carefully navigated the tracks at 90 degrees to avoid a spill. There was a great deal of debris and I wondered if a had a spare tube in my saddle bag, and then realized it was on another bike. I received a jaunty hello from an older gentleman (even older than me), who had a large stick in his belt and was walking a junkyard dog. Talk about being prepared.

As I cruised along Southwest Blvd and entered Kansas City, Missouri I encountered new bike lanes. The lanes worked great until the lane I was in was switched to accommodate a right turn lane. Drivers seemed perplexed by this road addition as I ducked and weaved to get from my lane to make a right turn. Maneuver accomplished, I soon entered Roanoke Park which is heavily treed with picturesque rock formations. It is hilly (yes, there are hills in Kansas City). The roadway turned to cobblestone which I bounced over on an uphill grade. As I neared the top of the climb, Greta the dog rushed up and licked my right ankle which was extended downward as I was unclipping. I know the dog’s name because the young woman who owned the dog was screaming it loudly. Greta must have found me much more interesting. No bite, no blood, no foul.

I carefully picked the rest of my route after leaving the trendy 39th street corridor. I arrived soon afterwards at my building and documented my trek photographically. This afternoon I reverse course to go get the Lshak. Total trip plus or minus 16 miles. A little sweaty but very satisfied by this new adventure. Could easily become a Friday tradition.