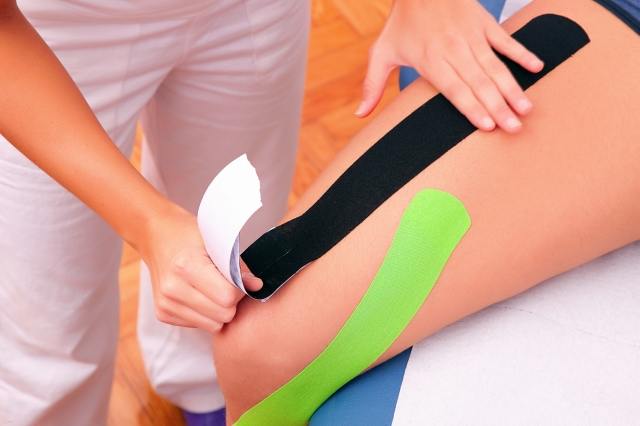 Brightly-colored strips of cloth adorning athletes’ bodies have become a cross between badge of honor and fashion statement on the competitive stage. Kinesiology tape, better known as kinesio tape or k-tape, gained notoriety at the 2008 Summer Olympic Games in Beijing. Developed in 1979 by Dr. Kenzo Kase, k-tape is still a relatively new concept to most Americans. Credited with reducing muscle fatigue and swelling, increasing circulation, and helping the body heal itself, k-tape has become a common sight at any sporting event. Along with muscle injuries, syndromes such as patellar tracking disorders, plantar fasciitis, tendinitis, and even carpal tunnel syndrome can be relieved with this stretchable, versatile fabric.

I first learned the technique in the late 1980’s while working with Australian tennis players on the European summer circuit. At that time, we were applying Elastikon, a rather thick tape that allowed range of motion while still providing a bit of support. Today’s kinesio tape better mimics human skin in both its thickness and elasticity. It is applied and left in place for several days, providing benefits around the clock while allowing full range of motion. Kinesio tape is not designed for significant stabilization as is the widely available white strapping tape commonly recognized on ankles. Thus the term “kinesio” which means “movement.” Strapping tape, which has almost no stretch, is designed to restrict movement in order to provide stability to the affected area.

There are few studies on the clinical effects of k-tape, however, anecdotal evidence is in favor of its efficacy. Creating extrinsic awareness of the injured muscle group and even the placebo effect can give positive outcomes to an athlete working to overcome injury.

K-tape is most commonly used during the acute stage of injury and can be used along with other modes of therapy. To bring about change in affected tissues and facilitate the body’s natural healing process, k-tape is used in different ways to achieve desired results.  Applied in a partially stretched state, the direction of pull acts as a communication system on muscle receptors. The tape is applied from the muscle origin towards its insertion point to work in the direction of the muscle fibers. Contact with the skin provides stimulus for neuromuscular re-education by creating awareness of the muscle group. The athlete feels the tape on his/her skin during activity, causing the underlying muscles to respond and reminding the body what it’s supposed to do. If the muscle begins to overstretch, the tape provides a cue for the muscle to back off and avoid further injury.

Another method is to apply the tape in an unstretched state while stretching the skin. This creates a gaping effect between the dermis and the muscle which is believed to aid in drainage of lymphatic fluid and to enhance blood circulation. Theoretically, the additional space allows greater contractility of the muscle thereby improving overall function.

For pain management, k-tape typically does not provide immediate relief but rather improvement over the 24-48 hours following application. The tape can usually be worn up to four days before reapplication is needed. It stays on through swimming and bathing, and is also breathable. It is recommended that a qualified practitioner apply the k-tape. Self-application can be difficult due to the inability to reach some areas of the body. For the more accessible areas, a practitioner can teach the athlete how to apply the tape properly.

Gina Poertner, CHES is the owner of Life Balance Sports who specializes in bicycle fitting and positioning, Myofascial Compression Therapy, and adapted sports. Gina coaches cyclists, triathletes, and track & field athletes at all levels of ability from beginner to elite. Gina’s expertise in sports physiology coupled with her detailed approach to bike fitting and coaching has given her athletes success across the US and Europe. Gina is a Certified Health Education Specialist focusing on exercise physiology and sports nutrition. As an Intern at Wesley Medical Center in Wichita, Kansas, Gina studied under orthopedic surgeon Dr. Charles Henning while serving as Athletic Trainer for Wichita Southeast High School and studying physiology at Wichita State University. She has authored and co-authored a variety of training and nutrition articles for Pez Cycling News, Ironman.com, LAVA Magazine, and Prologue Cycling Magazine. Gina has served on the sports medicine staffs of AAU Junior Olympics, National Gymnastics Championships, National Indoor Track & Field Championships, and individual world class, Olympic, and professional athletes. She is also a Certified Official for USA Track & Field and USA Cycling and continues to officiate local, national and international events.