Sven Nys Wins CrossVegas 2014, but not Without Controversy

Meredith Miller had just taken the win in the women’s pro field, cool evening temperatures had descended upon the desert landscape, and spectators eagerly awaited the start of the men’s pro event a CrossVegas. By the time the men’s field took to the line, large crowds had gathered and the atmosphere was reaching a fevered pitch. Fans tried eagerly to get a glimpse of their favorite athletes. The start list was a who’s who of the professional cyclocross circuit.  Jeremy Powers (Aspire Racing), Lars Van Der Haar (Giant-Shimano),  Jonathan Page (Fuji/Spy), Geoff Kabush (Scot-3Rox Racing) were all set to start the race. Sven Nys (Crelan-Aa Drinks) had also returned to defend his 2013 CrossVegas win. Nys has developed a large following at CrossVegas and the crowd’s reaction to his presence clearly indicated that he was the fan favorite of the night.

As the riders raced their way from the start and out onto the course, the crowd quickly followed behind, making their way to the various spectator friendly areas of the course to watch the race unfold.  The 3.3 kilometer course was mostly grass with a short pavement section, two flyovers, and several run-ups including some barrier sections. The exciting and highly popular ramp was back and organizers added a sandpit to this year’s event which the riders had to get through twice each lap. 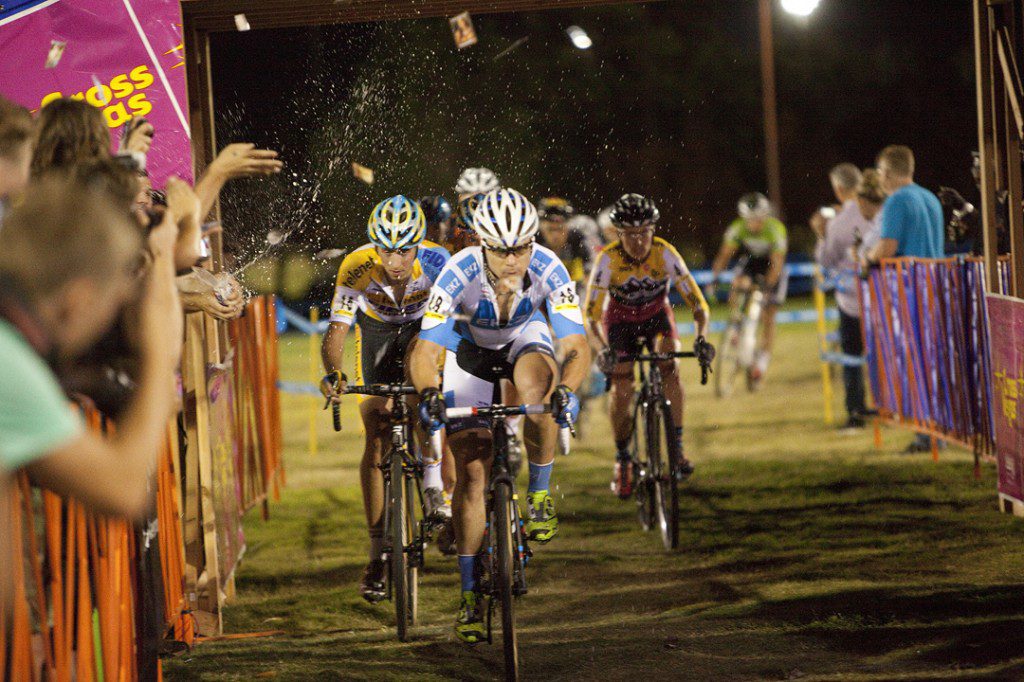 The first lap was fast, with riders making their way around the course in just over 7 minutes. Despite the quick start, very few riders split off from the pack during the first lap. The field was together, but it was strung out as the pace was high and riders were trying to position themselves further up in the field.

By the second half of lap two, 26 riders were left at the front of the race. Behind them, riders who had been shelled off the back of the race were forming small chase groups with the unlucky ones fending for themselves.

By the end of  lap three  Sven Nys was on the front of the race with 13 other riders following his wheel. A chase group of eight was closing back up to the front group about 5 seconds back. Still on the front, Sven took a look over his shoulder to check out the damage he was doing. Apparently unsatisfied with how many riders were left, he went back to work, not looking for any assistance at that point in the race.  Several riders made some early attacks but none of them were successful. After his efforts on the front, Nys slipped back into the pack to force other riders to take up responsibility for pace-making. 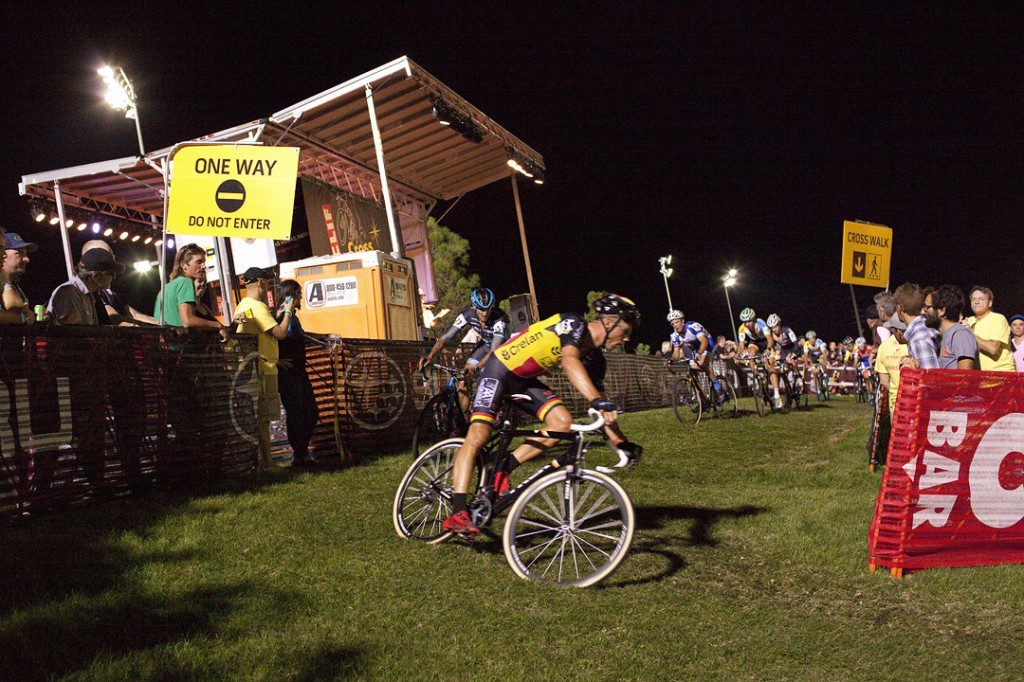 With six laps to go one rider went away and gained a small advantage over the leaders. Eventually, Nys and several other riders traded pulls and brought back the lone leader about halfway through five to go. The attack had done some damage though; the lead group was now down to 12 riders.

With four laps left in the race five more riders had bridged up to the leaders. 17 riders were now watching for moves to go. They didn’t want anyone, especially Nys, to get away this late into the race.

The action was at the front of the race but there was plenty of fun for riders at the back. Foundry Hill was packed with rowdy spectators; collections were going around and the spectators were shoving cash into the sand on the run-up, hoping to entice the riders to grab it on their way up the hill. To the delight of the fans, several riders obliged by grabbing cash on their way through the barriers.

As riders crossed the line to start their final lap, the lead group had been whittled down a little more. The riders were watching each other to see who would make a move; the smart money was on Nys. As the leaders reached the barriers about halfway through the final lap, Nys launched an attack, delivering a flawless run-up through the barriers. He quickly opened up a gap through the next two corners and shattered the rest of the group as they tried to get back on terms with Nys. By the end of the final lap Nys had opened up enough of a lead it was clear that the chasing riders were no longer going to be able to bring him back. Nys rounded the final corner with a solid 10-15 second gap over second place rider Lars Van De Haar who fought to the end, closing down the final time-gap to 4 seconds as he crossed the line. Jeremy Powers finished strong, just 8 seconds behind Lars.

Controversy arose immediately after the finish of the race. Shortly after crossing the finish a very heated exchange took place between Nys and the race officials. After a while, it became clear that the race organizers were planning on disqualifying Nys for accepting an illegal hand-up during the race. Eventually, it was decided that Nys would not be disqualified and would face a fine instead.

When asked about his race tactics, Sven Nys described his thoughts during the race. “It is a more technical, tactical race. I wanted to wait until the last two or three laps towards the end to do something special. The race had a very big group in the front. I was always waiting, waiting but I felt I  very strong the whole race. I did a few accelerations to close gaps in the beginning of the race and I said. ‘If I can do this in the last lap, I can win if I don’t make any mistakes.’ It went like I hoped and I am really happy with a victory over here, it is my second one. It is good for the motivation for the next few races in Europe.”

Nys answered a question about how CrossVegas fits into his early season cyclocross training and schedule, “That’s not so easy because the cyclocross season starts in Europe next week so you need to handle the jet lag. It is hard because a lot of riders don’t come overseas to do this race. So yeah, maybe the next two weeks it is going to be hard but there are some GCs coming in the next two to three weeks so I think I am ready to battle all the other guys. I am happy with my victory and what comes, we will see.”

Lars Van De Haar has won in Vegas before. The course has changed since then and Lars was asked how this year’s event differed from when he won, “It was a little bit more technical here today. It had a sandpit that which was really dangerous because it go hard underneath. But other than that, the course was a little bit tired, the concrete was a little bit slippery; it was a hard race.” 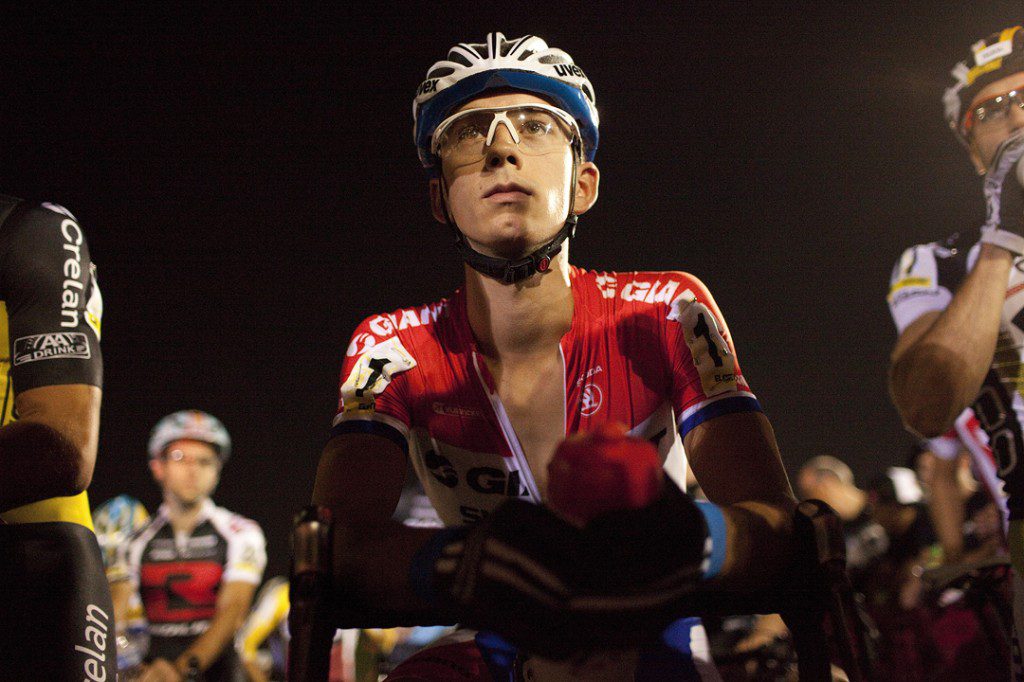 Many of the riders at CrossVegas seemed to echo the same sentiment, that they were not confident in their early season fitness or they still felt that they needed to get rid of the early season cobwebs, “I didn’t really feel good, I had a little crash in the first lap and on the second or third lap someone crashed before me so I had to close some gaps. I just wanted to get into the rhythm, get the first race over and get a feeling of the bike right. I didn’t really feel well on the bike I felt like I was searching for the right feeling in the corners, the right feeling on the bike, and it took awhile to get that. The last three or maybe four laps I felt a lot better, felt I was able to follow. Of course I know Sven really well. I know what he does. I know where he does it. So I knew I had to be in the front before the barriers, but he was still able to get across. He knew where my two worst corners were and he took advantage of that.”

The course is clearly a tough one, making the riders pay for any effort. Lars felt most riders were taking it easy, afraid to put forth too much early effort, “You had to be careful with your energy I think everyone was taking it a little calmer, seeing what everyone was capable of. The last two laps the race opened a little bit.”

He felt he was adequately prepared for conditions in Las Vegas,”I went to California to train for a week. It was a pretty important month here to do some more endurance so I went to Giant headquarters and did some training in the mountains.”

Lars joked about the America lingo he had picked up during his training here, “[I] had some fun times there. I know a little bit about the American culture – awesome, dude, you know those kind of things. I learned some words – totally, dude, awesome, epic, and so on.” 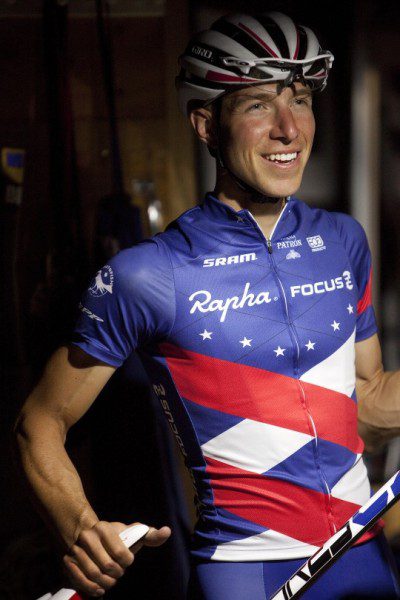 After the race, Jeremy Powers stated that tactically, he decide to wait and watch the other guys in the race before making any moves. “I have raced this race quite a few times before. With Lars and Sven coming over, I know a little bit about how it rolls and you can watch a little bit. I wanted to watch because it is the first race of the season. I have always done that tactically, watched to see who was there, and I knew I felt good enough to do something tonight, I just didn’t know what. When Sven jumped the barriers in the last lap he put a good gap in and he nailed those last two corners after the barriers. He got a bit of a gap and proceeded to put time into both Lars and I. Not a whole lot to say there except he rode stronger.”

Powers looked good the final couple of laps but admitted that there is always a place for doubt in any race, “These are the best guys in the world. So yes, there was doubt.  I don’t know what they’re bringing to the table but I knew my training had gone well up to this point. I did fire a couple of small shots off in the final and just stayed up front. It is a tight and narrow track this year so there were definitely some different tactics happening out there in regards to positioning, so I was just trying to stay in the front. The Fidea riders had a lot in numbers so I wanted to make sure I wasn’t getting caught out behind them as well.

“Basically, it was very much the strongest person won tonight. You just want to watch it and try and make some moves and see if there are a small amount of people on the back getting tired.  You could see it was coming a little bit more, a little bit more and then with two to go it started to thin out a little bit. When Sven jumped those barriers, kudos to him, he was very smooth and clean and just opened a gap so congrats to him.”