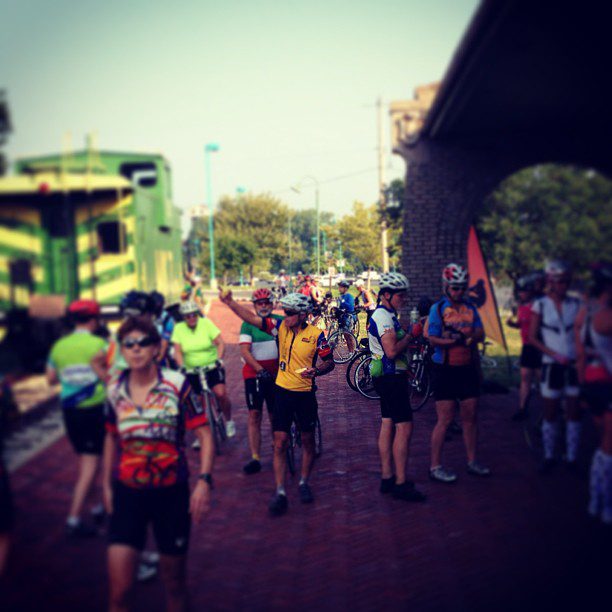 I’ve made no secret about my own personal cycling proclivities. To me, “going out for a ride” really amounts to precisely that: hopping on my bike and leaving my driveway in search of parts known and unknown. Frankly, I don’t put a lot of stock into loading my bike up on the back of the car and driving somewhere so that I can ride my bicycle. Just to be clear, it’s really not that I don’t actually do that from time to time, but the bigger issue for me is that I don’t want to make a grand production out of riding my bike. I like to keep it a fairly casual affair. Getting all threaded out in specialty clothing and driving to a cycling destination seems  counterproductive to my whole conception of the JRA ride (JRA translation: Just Ridin’ Around.)

That also pretty much sums up why I don’t participate in group rides. I mostly prefer to ride by myself, moving at a pace defined only by me on any given day.

It is kind of fun however, to participate in an organized cycling event every now and then. The thing about this is, I’ve gotten kind of fussy about which events I choose to ride. For instance, I really enjoy our local tweed ride, populated as it is with the goofy weirdness of my fellow vintage bicycle enthusiasts. And each Spring I fundraise for, and ride in, the Tour de Cure, because as a diabetic myself I feel rather close to the cause.

But I don’t choose to participate in very many other charity rides. Let’s be honest: like most other participants I would be riding in a charity event mostly because I like to ride, and not really out of any true sense of charity. I don’t care for the marketing tactics that seem to have developed in recent iterations of many charity rides. It used to be that one would pay a registration fee and part of that fee would go to the charity. Many riders would also raise funds as part of their participation. I object to the current trend of having riders pay a registration fee and commit to a fairly large fundraising goal; if the rider fails to meet that goal they are responsible for making up the shortfall. It seems to me this rather discourages riding and participating. Now don’t get me wrong, I really do get that some very worthy organizations need to raise funds in order to meet their own goals. And please don’t send me hate mail for saying this: but I just want to ride my bike. I sure don’t mind some or all of my fees benefiting these organizations – but I don’t like to feel held hostage, and that is precisely what some current fund raising tactics feel like to me. Although I hope I am proven very wrong, I predict these will eventually bite some organizers right in the ass.

So what did I do this morning? Well, of course I participated in a bicycle event! In fact, I went well out of my way, loading up a bike and driving two hours to Rocheport, Missouri. BikeMO is an annual fund raising ride for the Missouri Bicycle Federation and the Missouri Bicycle Foundation. These organizations advocate for cycling in the state of Missouri, promoting improved bicycling conditions in our fine state. In a lot of ways I feel like they’re more of a grassroots organization than a professional fund raising wheelhouse – and quite frankly that one small distinction makes me feel very good about participating in their events. Their goals and impact are local so in a very real way my participation is an investment in my own community.

Like many other similar rides, this event has various options for riders. This morning riders had the choice of following either a 30 mile, 65 mile, or 90 mile route. Because my time was limited today I figured I could only commit to the 30 mile route before having to head back home.

As it did last year, the ride begins and ends at Les Bourgeois winery, atop some very picturesque bluffs overlooking the Missouri River. The early sections of all routes take riders through rolling hills, but this being my second year to participate, I knew those would shortly level out to pancake flatness once we reached the river bottoms.

Coming down a steep hill from the winery, we passed through Rocheport. Rocheport is a tiny Missouri River town, with a few antique shops and a restaurant or two. But the place is literally filled with bed-and-breakfast operations. As one of the main trailheads for the KATY Trail, Rocheport is a busy little place with cycling tourists coming through and staying, and eating all week long during the best weather months. (Fair disclosure: I have dined in Rocheport; I am a food snob; I like the fare in this town!) One of the route options allows participants to leave the highway at Rocheport and use the KATY Trail to bypass those initial rollers. It’s a really smart option for a bicycling advocacy group to have included, by the way. Not every participant this morning is regularly active in cycling. There are moms and dads and kids and, quite frankly, some people who are very casual bicyclists. For them, some of the hills appear to be a bit daunting. So I really like this option, if for no other reason than that it allows all participants to feel like they are fully vested in the ride. Everyone gets to enjoy him- or herself on a bicycle. Win, win!

Looking around as I pedaled, I noticed a lot of carbon fiber. But I also saw a few steel bikes as well, weaving in and out of the pack. Interestingly, one woman rode a Series Paramount, another a Gunnar; both are kinda sorta siblings to my own Waterford-built Boulder and my Waterford-built Paramount.

The 30 mile section of the route that I rode passed through rolling hills of country, majestic stands of Oak trees, and row upon row upon row of corn, eventually to encounter a bridge spanning the width of the Missouri River, before coming into Boonville Missouri and rejoining the KATY Trail at that point. At the historic train depot in Boonville, the event organizers had set up a rest stop for cyclists to recharge and refuel. Riding through the flat river bottoms I noticed that the majority of riders stayed pretty close together. With a slight tailwind aiding us, this part of our journey was quite fast (My computer showed that I averaged 23 miles an hour for the first fifteen miles – really fast for me, especially considering I mistakenly never left my small chain ring!) In any event, a large group of us arrived at the rest stop en masse, sweating profusely in the morning humidity, and clamoring for bananas, cookies, peanut butter, water, etc.

Which they had in abundance.

I really appreciated just how “right” the organizers got things today. Lines were short, registration was quick, and when we got to that first stop there really was plenty of snacks and water on hand. The overall atmosphere, too, was convivial. Everyone seemed to be talking to everyone else. In fact here I was, a two hour drive from home, and I found myself running into people who lived blocks from my house. So to top things off, new casual acquaintances came about during the ride. A couple of us rode the return route together, slower and much more casually in fact, and got to know one another.

For those sticking around after the ride, Les Bourgeois had the wine and beer flowing, and lunches, prior to the start of an after party. Sadly, my time was already spoken for and I had to load the bike and head back immediately.

Next year. Next year! 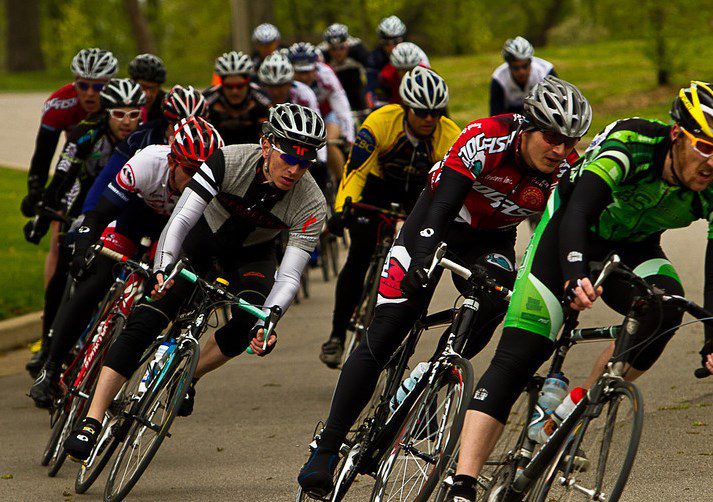 A Full Weekend of Racing at The Tour of St. Louis 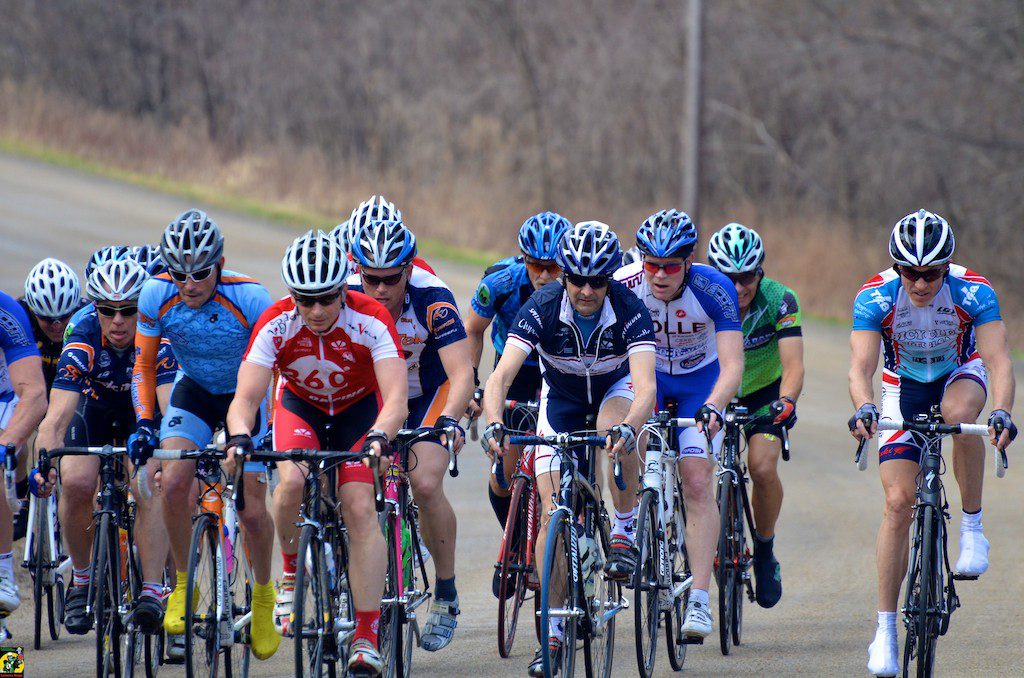 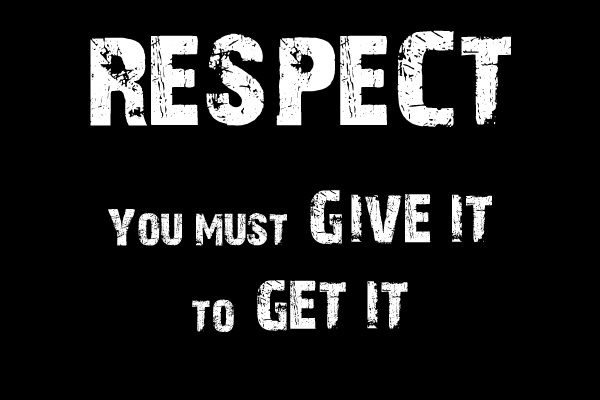 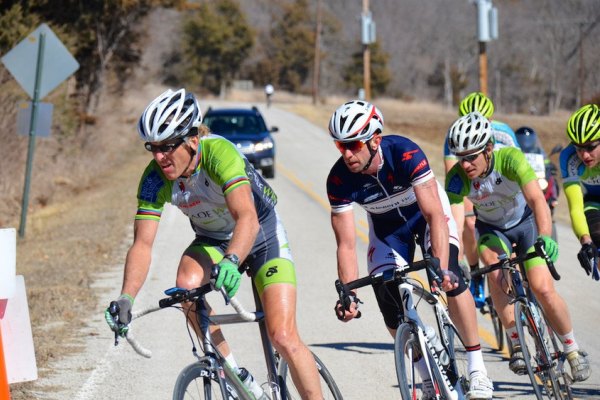